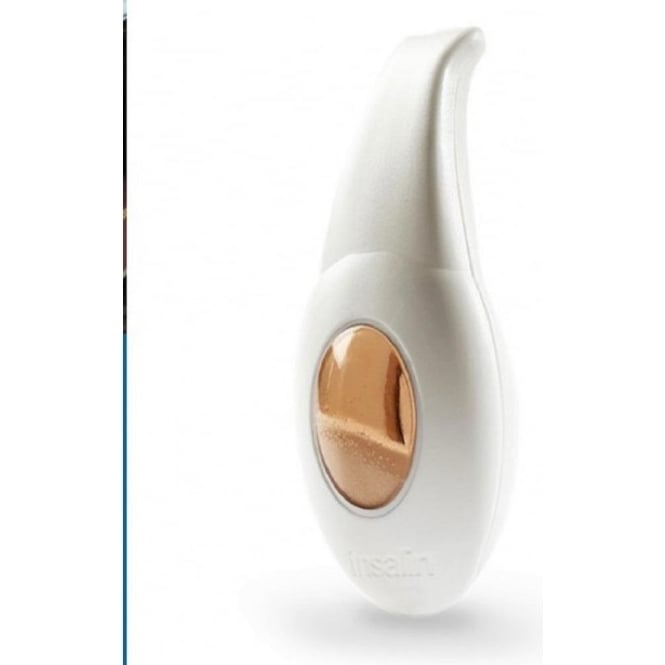 The salt pipe inhaler InSalin is our complementary product to the mainly night salt therapy device, Salin Plus, giving you the chance to get even more exposure to the salt therapy, maximizing the beneficial results.

InSalin is filled with halite salt crystals formed in the Middle Miocene era from the Transylvanian Praid salt mine, same rock salt that we use in the other salt therapy devices.

When the air produced by this device is breathed in, the salt micro-particles enter the upper and lower respiratory tracts where they dissolve in the outer layer of the mucus covering the respiratory epithelium. The saline micro-particles physically act on the soft liquid layer covering the respiratory tracts, by modifying the superficial tension and viscosity. The mucus becomes more fluid and it is easily mobilized by the vibrating cilia of the respiratory epithelial cells, in order to be eliminated at the pharyngeal level, by ameliorating the mucociliary clearance.

By using InSalin inhaler significant therapeutic effects can be obtained in different diseases of the upper and lower respiratory tracts:

For the 2 years duration of use in adequate storage conditions in what concerns the humidity, the InSalin inhalers will provide their users with a permanent quantity of dry salt particles aerosols, thus allowing to achieve the therapeutic effects.

We recommend a daily use of this device, 10-15 inhalations, respectively 1-1.5 minutes/2-3 times per day. However, there is no limit regarding the daily number of utilizations. The daily amount of salt breathed in at a normal use is under 0.05 g.

InSalin inhaler offers a complementary treatment, which does not replace the current medical treatments.

No refill or replacement are required.

The device does not have contraindications.

At Chemist Connect our delivery service is quick, affordable and efficient.

Shipping is available to not only the UK, but to Europe and around the world, with a choice of standard, express and tracked delivery options depending on your needs. (Note not all items can be shipped worldwide, due to some shipping and sales restrictions)

Our standard UK & Ireland delivery charge is FREE for all orders over £30.

Orders under £30 are only £4.99 for Standard Ireland Delivery

Standard delivery for international orders will normally be approximately 7-14 days for customers within the EU and 7-21 days for customers outside of the EU. We cannot guarantee transit times through customs so on some occasions this may take a little longer.

Our standard delivery charges for international customers are £8.99 within Europe and £9.99 for the Rest of the World. This will cover the postage of almost all orders. If we need to give you a quote for international postage for example due to weight we will contact you as soon as possible after ordering.

Some items such as medicines and products classified by the Civil Aviation Authority as Dangerous Goods such as aerosols cannot be shipped internationally.

If you have any queries regarding your delivery our customer service team can be contacted to help you with any questions you may have.

We understand that there may be occasions when the items may not have been delivered correctly or that you no longer require the product.

If this is the case then you can return any unwanted items within 28 days for a refund or replacement. This applies as long as items are unused and are returned with the original undamaged packaging.

* For full details please navigate to our dedicated return page.

Free UK Delivery On all orders over £30
We Ship Worldwide Click here to find out more ›
?
Top